Further to my previous post, a vote to leave the EU, based on the hope that this will enable us to control our borders and stop immigration from eastern Europe, will have disastrous consequences for our democracy.

People who voted to leave for that reason will be disappointed and will feel let down (again) by politicians who will be unable to keep their promises. This will almost certainly lead to a rise in right-wing extremism and a real threat to our democratic system.

Why are the Remain Campaign not making a major issue of the Brexiters most effective but false argument – control of immigration?

The main reason the Brexit campaign is making progress is because they are convincing people that leaving the EU would give us control of our borders and allow us to exclude east European immigrants. It will do no such thing.

Even Brexiters admit that if we leave the EU our economic survival will continue to depend on access to the European free market. That means we will have to join the European Economic Area, just like Norway and Switzerland. A condition of that membership is acceptance of EU rules on migration (and some other things). The result would be that we would have less control, not more, over immigration policy. Instead of being one of the biggest EU countries making any changes to the rules, we would be outsiders, bound by rules in which we have no say at all.

The letter below was sent yesterday to the East Anglian Times:

Labour has set up a unit under Sadiq Khan aimed at reducing the "threat" from the
Greens at the General Election next May.

Its interesting that Labour have switched from saying the Greens are irrelevant to
being a "threat".

But we have been here before. Mr Khan says

Simon Hughes tried that one for the LibDems several elections running.

Mr Khan also used the tired old argument that a vote for the Greens .... (but
actually its anyone other than Labour) ... “lets the Tories in”. The Tories use
the same argument the other way.

Its an arrogance of titanic proportions that Labour and the Tories think only they
have a right to have MPs and to govern.

There are many reasons why Greens will not vote Labour and also why many former
Labour voters are now going Green.

Here are just some of those reasons:( Collapse )
Labour and the Tories may not like it, but the election next May will offer more
choices to voters and this time with more parties capable of winning seats. The
politics of the future is not going to look like the past. 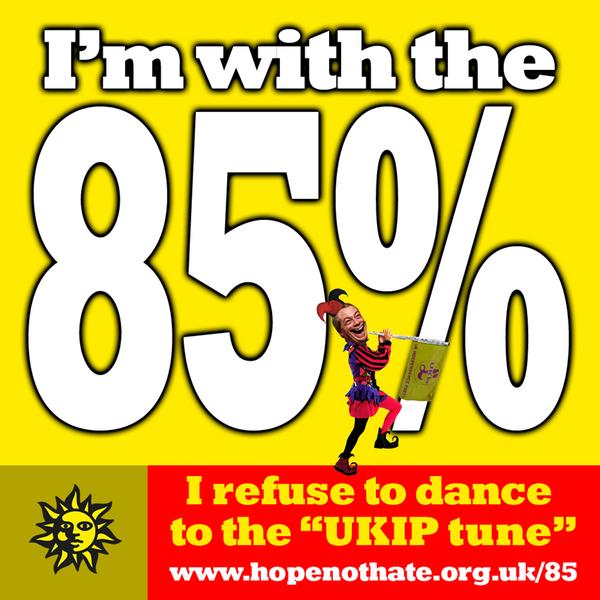 Let's tell our politicians that we will not tolerate them trying to out-UKIP UKIP.

Opinion polls give UKIP the support of just 15% of the population. Where are the other 85%? The problem is we are quiet - even silent. That can change, right now if we make a stand!

By signing the pledge, you’ll be making a commitment to help defeat the politics of fear and hate.

This is copy pasted from a bit of an email received today. Please sign the petition and spread the word:

Home secretary Theresa May has proposed new gagging orders that would restrict free speech for a wide range of political activists. These "extreme disruption orders" are part of a new counter-terrorism strategy aimed at extremists, but they could actually affect many citizens. Please sign the petition urging the government to reject the proposed extreme disruption orders.
http://www.care2.com/go/z/e/AKEME/zPc8/BWU44

This treaty is being negotiated in secret between the EU and USA and amounts to a complete corporate takeover and an end to effective democracy. This link is the best explanation of the problems with it that I have found so far:

I note that 38 Degrees have also started a campaign against it. See: https://secure.38degrees.org.uk/ttip-leaflet-action.

Of the UK political parties, this promised disaster is supported by Labour, Tories, LibDems and UKIP, and opposed only by the Green Party and the Scottish and Welsh nationalists.

While I would be reluctant to see us leave the EU (although it needs a lot of reform), if this goes ahead I would regard it as sufficient reason in itself to do so.

While looking at other questions being suggested to put to Ed Davey (see previous post) I came across this link to the Earth Charter. It deserves to be more widely known and taught in schools.

The Avaaz organisation, usually associated with big petitions for good causes, has arranged a meeting with Secretary of State for Climate Change Ed Davey, and is collecting questions to put to him. Thousands are being suggested so I don't suppose mine will be selected to put to him, but for what it's worth it is:

Is our species name totally wrong - Homo sapiens, meaning "thinking man"? How can anyone believe so when your government is pushing the development of shale oil and gas, putting corporate profits and economic growth ahead of sheer survival? The policy is utter madness.

I just received the following email from Greenpeace. I've signed - will you?:

Statoil's drilling rig is heading to Bear Island - but we've intercepted it. A team
of 15 climbers just arrived at the rig. They've hung a banner and will stay on the
rig as long as possible to stop it drilling.

Norway paused the plans after our outcry, but it's going to take more of us joining
in to protect Bear Island for good!

It's not easy hanging out on a freezing oil rig in the Arctic! Can you build the
pressure on Norway AND keep the spirits of the team warm by asking more people to
sign the petition right now?

Forward this email and ask your friends to sign the petition here:
https://secure.greenpeace.org.uk/bearisland

Bear Island is a nature reserve. It's home to snow-white Arctic foxes, a million
breeding sea birds and the occasional hunting polar bear. If a Statoil rig leaked,
oil could engulf Bear Island in seven days and be nearly impossible to clean up.

Norway's environment minister Tine Sundtoft had suspended Statoil's licence to drill
while the dangers were reviewed. But yesterday, the suspension was lifted.

Our best chance now is a massive surge of international pressure on Norway and its
environment minister to protect Bear Island, and live up to its reputation as an
environmentally-responsible nation.

Ask your friends to join us too - just forward this email and they can sign the
petition. https://secure.greenpeace.org.uk/bearisland

The team of 15 Greenpeace volunteers on the oil rig are holding on tight in the face
of freezing temperatures. And they're stopping the rig from going anywhere.